We are delighted to share the news that both Melody Nixon and Noelle Harrison are featured in Gutter The magazine of new Scottish writing Issues 16 & 17. Quite by coincidence both pieces, though very different, were inspired by Norway. 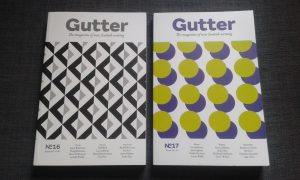 You can read Melody’s On watching the Norwegian Secretary of State open an art exhibit in a small city with an average income that made you cry when you found it out on the internetz because you were hungry, your student loans were due & America had happened to you in Issue 16 while Noelle’s Vardø’s Daughters features in Issue 17.