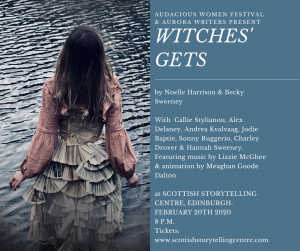 We are thrilled to announce a return of our show WITCHES’ GETS for one night only.

‘Emotionally gripping and beautifully performed, Witches’ Gets, grabbed its audience with both hands and refused to let go until the lights went up.‘

‘Witches’ Gets is based on the true story of Norwegian witch trials on the arctic island of Vardø over three hundred years ago. I was very interested to learn whether such a dark and harrowing tale could be successfully distilled into a 70-minute piece of theatre, and I was not disappointed. The expectant hush from the audience as we took our seats before the minimalist, candlelit set was  palpable, and from the opening lines, the all-female cast swept us up in a maelstrom of claim and counter-claim, recrimination, bitterness and grief.

The brutality of what happened to those young women in what became known as The Witch Panic of 1662 was laid before us in forensic detail; the accusations, the politics, the grudges, all steeped in a climate of superstition and fear.The performances were bold and powerful, sometimes whimsical and always poignant. Written by Noelle Harrison, the script was raw, unflinching but strangely poetic, as charms and incantations swept through the space. This play, blending as it does spoken word, film projection, music, and movement, is based on Harrison’s novel Where the Ice Burns. The projected segments, which portray a young Scottish woman researching the trials and questioning her own identity and heritage bring the piece bang up to date, a timely reminder that in a world ruled by men, female power is still considered a dark force to be reckoned with.

A haunting, relevant piece of theatre, which kept me on the edge of my seat and thinking about it long after it ended. We all have traits which may once have singled us out as witches. The plays hashtag #onceawitch continues a conversation begun 300 years ago and still totally relevant today.‘

Sandra Ireland, author of Beneath the Skin, Bone Deep and The Unmaking of Ellie Rook

‘Witches Gets is a thoroughly immersive experience, where you are taken back to the frightening hysteria of 1600s Norwegian witch hunts, as brought to life by a girl in current day Scotland who is facing her own battles. If she’d lived hundreds of years ago, would she have been branded a witch too? Through letters of the time, she becomes haunted by the girls who came before her, while the audience is similarly haunted by the spectacle before them. The passion of the cast acting out their roles so expertly and in such close proximity to the audience enhances the viewing experience, ensuring that it remains something that sticks with the viewer long after the last word has been spoken. Noelle Harrison has created a visual work of art that I would definitely recommend.

‘Written by @noelle.harrison5 and directed by @alyssaowrites, Witches’ Gets is a spellbinding multimedia performance….I was lucky enough to have a seat for opening night and was enthralled from start to finish, immersed in the dark story burning white hot from the shadows of the past.‘